1. Knitting principle of the presser foot

The presser foot is generally formed by a unique pulling mechanism composed of a thin and long metal sheet or steel wire, which is installed on the corresponding position of each loop-forming system of the triangle seat of the flat knitting machine and moves back and forth with the triangle seat. When working, the presser foot is just between the grid teeth of the two needle beds, under the latches of the rising needles, and above the old stitches.

The cross-sectional shape of the presser foot is different, and its optimal working position is also different. Generally, it should be located at several needles before the bending of the yarn before the starting point, that is, before the bending section. The primary function of the presser foot is to act on the old coils that have just been formed during the loop forming process, preventing these loops from rising with the pointer that is being withdrawn to achieve the purpose of pulling the fabric. The pulling method is centralized pulling... 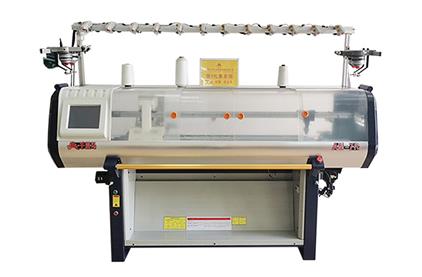 2. Influence of needle bed mouth section and presser foot shape on the weave of knitted fabrics

The cross-section of the presser foot can have many shapes, the most common shapes are round and rectangular cross-sections:

For flat knitting machines with parallel cross-sections on both sides of the needle bed section, the presser feet are primarily rectangular, mainly knitting single-sided weave such as straight needles. The tissue pulling is formed by the downward pressing and pulling of the presser foot and the needle bed, so the presser foot is always inclined from front to back and downwards according to the direction of head movement.

4. The advantages of knitting with a presser foot

It can transfer stitches, take off stitches, and hold stitches. In this way, even if a tissue needle is detached from the old coil and becomes an "empty needle," these separate old coils will not appear "ladder-off" due to the pulling force, and the pointer holding the old coil that has been withdrawn from work can be used again when needed. To work.

It can not only transfer the loop to prevent the needle but also release the needle with an empty needle, and the number of needles can be arbitrarily set at one time. Partial weaving is possible. In a weave, part of it may not be knitted, and part may be knitted, such as multi-column tucks.

Empty a needle to start the mouth; you can knit the mouth course without a threading board.